I heard this said the other day, and it struck me as an unpopular truth.  While on the one hand, none of us want to suffer, and parents generally are quite loathe to see their children suffer, I don’t think the right path is to eliminate suffering altogether.  I use the phrase “Age-appropriate Suffering” with parents a lot, when we are talking about where to put healthy emotional boundaries.

Imagine that your child is angry and sad (even furious and outraged!) that you won’t let her have the thing she wants.  Most of the time, this is an example of age-appropriate suffering.  Feeling pain, anger, sadness, disappointment, or even resentment is an okay experience for her to have.  It sucks being told no!  We can let her have those feelings (while still not letting her have the thing.)  And, the way we set ourselves apart as compassionate parents is that we can both allow her to experience this age-appropriate suffering, AND we can be present and compassionate for how she is hurting.  I can both be the source of your pain* (because I said no) and the source of your comfort (because I look upon you with love and compassion and understanding.)  I believe that Kristen Neff said it well: “Hold pain with love.”

It’s not healthy to prevent our kids from having “age appropriate suffering,” and in fact when they do–and especially when it’s done with love and support and witness and understanding–it becomes a powerful positive force for growth.

* Hopefully I don’t need to clarify that abusive behaviors or dynamics are not what I am talking about here.

The Arc of the Tantrum Parenting Class

She’s not tantruming yet, but you know what’s coming!

How can I get my kid to cooperate?

How can I get them to stop arguing!?

How can I get them to CALM DOWN!?

Do you feel like you don’t know what to do? Or that what you’re doing isn’t working?

There’s a TON of science about how brains work that can help you feel confident and effective in dealing with difficult behavior.

This class is based on the individual, private work I do with parents in my parent coaching practice. It includes a deep dive into the Arc of the Tantrum, and a whole lot more. There are 6 sessions, each one walking parents through a critical step in understanding–and then shaping–their child’s behavior.

WHO: The class is for parents of kids ages around 3-9.

COST: $30 per class (payable in advance). Discount: Register with a friend and you both save $5 per class.

Click here to send the registration fee.  ($180 for one household, $300 for you & a friend)  We will email you at the email address you use to send the money with confirmation and zoom details.

Please write your name in the note and *triple* check that the email address you send paypal from is the one you want us to send info to.

PARENTS SPEAK:   Parents who have taken this course say:

“We wanted to tell you how much we are LOVING this class and that we’re getting so much from the content and format.    We’ve left each session with just enough content to chew on and not be too overwhelmed and you’ve got a great style where we feel like you “get us” but we don’t feel like totally horrible parents for our mistakes.  We feel more connected to each other as parents too which is lovely for us.  So – big, big thanks to you.”

“This class was very informative! Lots of good information on what to do/what not to do and when.”

“This class was informative, applicable to everyday parenting challenges, and encouraging. As parents we always want to do right by our kids but know that we don’t always have the tools. Katie did a wonderful job walking us through the principals and teaching us how to apply them while encouraging us along the way.”

“This class was GREAT!”

Click here to send the registration fee.  ($180 for one household, $300 for you & a friend)  We will email you at the email address you use to send the money with confirmation and zoom details.

Please write your name in the note and *triple* check that the email address you send paypal from is the one you want us to send info to.

Parents, and especially white parents, have important work to embrace around being, and parenting, in anti-racist ways.  Let’s start with two steps.

I believe that most everyone in my life would describe themselves as “not racist.”  If asked, they would disavow racist ideas and actions.  However, as I have learned embarrassingly recently, it is not enough to just be “not racist.”  We have to learn how to be, and actually practice being, “anti-racist.”

Racism is a machine.  A machine that influences thoughts, actions, and results.  Where white people are concerned, it generally works behind the scenes, and to our benefit.

I’ve thought of myself as “not racist” my whole life, but at the same time, I was benefitting from that racist machine.  I didn’t create or feed that machine, but, -and this part is important: I never used to do anything to dismantle that machine, either.  (*The killer realization?  Realizing that I had worked to dismantle other machines—like sexism—but the one that benefitted me, I left alone.)

If you say you “aren’t racist,” and you want to live according to your values, you must work to dismantle the racist machine.  This is what being “anti-racist” means.

When the lessons are really important, parents teach things proactively. (eg: safety)  We need to add teaching about racism to that list.  We must educate our white children about racism, how white supremacy works, and ways they can help dismantle the machine.  We need to speak openly about skin color and institutionalized racism in this country.  We need history lessons, values-based lessons, and concrete examples in their current lives.

I bet many of you have had conversations with your kids about things like strangers, approaching houses on Halloween, looking both ways, not climbing on the fence at zoos and the Grand Canyon, etc.  Parents of older kids have probably talked about vaping and dark alleys and parking lots and parties with alcohol.  We do that because we believe it will help keep our kids safe.  It’s (past) time white parents took the same approach to parenting about race.

Our country is literally on fire today, and no conversation around tonight’s dinner table is going to fix that.  But… what if we each had a hundred conversations over the next hundred days?

What anti-racist conversation can you start at dinner tonight?

This is all only a start.  There’s more work to be done than just conversations, but we can at least start here.

Last note: I did a parenting webinar called “Talking with Kids about Race” a year or so ago with a friend and colleague: Jeffrey Swan. The webinar is now free to watch.  Please do go check it out.

If you’re looking for extra support for how to talk with your kids about race, we’d love for you to watch this webinar from 2018.  It’s now free for anyone to access.

Talking with Children about Race Webinar

Super-parenting for ADD by Edward Hallowell.  (He also has a podcast with about a million episodes.  Free and easy to access!)

This post contains affiliate links, which means I may receive compensation if you click the links and then buy. (and if you do, thanks!)

The Care and Keeping of You (The American Girl book). These people know their market!  This book is known and loved by a gazillion people.

This one was recommended to me as a more inclusive puberty book for girls:

And for boys, I like this one but FYI it does refer to boys developing an interest “in girls” (ie, it is heteronormative.)

And if you want a book that offers some information about puberty plus reproduction and other sex-related topics, this is always my favorite for kids 7 (ish) and above:

And for kids in 6th grade (ish) and above:

This post contains affiliate links, which means I may receive compensation if you click the links and then buy. (and if you do, thanks!)

Divorce-related resources on this blog

There are several articles, a video, and a webinar on this blog, created specifically to help parents through the divorce process.  They are collected below for easy access.

Please feel free to email me with questions or to set up an appointment for parent coaching around divorce, co-parenting, or however you think I can help.

Note: This was originally published in 2012, but every time I add to this, I repost it with the current date, just to make it a little easier for myself & others to find the post again!

After a Lockdown: Tips for Teachers 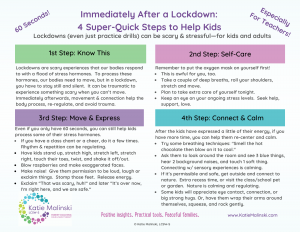 A mom friend got caught in a lockdown at her child’s school recently, and she posted about her frightening experience on Facebook. Another friend asked if anyone helped the kids re-regulate their nervous systems when it was over. Unfortunately, the answer was no–kids were just released to go on to the next thing, probably still scared and with adrenaline still pumping.  I realized then that nervous system regulation is something that therapists think about a lot, but teachers probably don’t get tons of training on.

Basically, when a person is in a stressful situation, your nervous system escalates like it might have to fight an attacker (heart rate up!  breathing fast and shallow! etc.)
Your body wants to Move! Fight! Run!

But if you have to stay still and silent (like in a lockdown) it can cause additional stress, even trauma.

So when these lockdowns are over, everyone’s bodies need a little relief.  It’s healthy and helpful to physically express some of that pent up energy, and then to connect with another safe person, and to try to calm the body down again. The good news is that there are many things that a caring adult can do in that situation to provide a little relief and support to kids, even in just a few seconds.

What I really wish is that no child would have to experience lockdowns ever again.  Until that day though, this infographic is for teachers (*) who are interested in knowing more and having more tools that can be pulled out if you need them, even if you only have 60 seconds to spare.

(*) teachers, staff, parents, administration, anyone who finds it helpful!

Here’s the infographic in pdf form: Lockdown infographic.  If you think it will be helpful to a teacher (anyone) in your life, you are very welcome to share it with them. Please don’t edit it.

Update: Right after I finished the infographic, I saw that someone had shared this link and this video with me.  Good info on the link, and the video is of Israeli children singing a song that their kindergarten teacher wrote for them to help them cope with their bomb drills.  I loathe that these dangers exist, but I’m all about making the best of what we can.

Finding and Choosing a Therapist for Yourself or Your Child

Q: When should a parent seek professional help?

I had the pleasure today of being interviewed by my friend and colleague Barb Steinberg.  She’s a teen life coach, and asked me to speak with her about parenting teens through divorce.  You can watch the interview (just 25 minutes) below.  We talk about some of the ways that teens might react to divorce, what parents should know to look for as a sign that their child is having a really hard time with the divorce, signs about when to speak to a professional, how to talk with kids about divorce, and more.

And if you haven’t already seen these–there are several more helpful blog posts related to Parenting through Divorce on this website–see them here.