Mommy, did you ever get segregation when you were a kid?

Home • Posts • Mommy, did you ever get segregation when you were a kid? 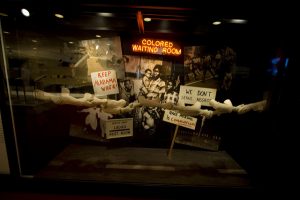 My 7 year old asked me this question not too long ago.  It took me a minute to understand what she was saying—her pronunciation was ‘creative,’ plus the topic took me by surprise.  But once I figured it out, I was both sad and grateful to her for asking the question.

I told her that yes, I had seen segregation as a child.  I grew up in rural Louisiana, which in the 80s was very segregated.  I told her my strongest childhood memory of segregation—how the doctor’s office that we went to had two waiting rooms, but patients separated by race instead of sick & well.  Sadly, I had many more stories of segregated spaces to share: my high school lunch room, every church I’ve ever been in, and every neighborhood I’ve ever lived in.

Like most of the white progressive families I know, my unconscious default is to not talk about race.  I was certainly brought up to believe that doing so is extremely impolite.  It’s really only in the last few years that I’ve begun to challenge that for myself and with my family. As I see it now, though, it’s not impolite, it is crucial.

Research over the years has demonstrated clearly that even very young children notice racial differences, and all humans are susceptible to what’s known as “in group bias.”  In-group bias is that hard-wired tendency to prefer people who are like us in some way, and to make decisions and value judgements based on whether someone is in our group or not.  I think these two findings make a very, very strong case for the importance of talking with kids about race.

So how do you do that?

Well, sometimes your kid makes it easy and asks a question, or, less comfortably, you might also hear your child saying something that reflects bias.  Either of those two situations is a perfect “talkable” moment for conversation.  You can prompt good conversations, too—using daily life situations to point out issues related to race and social justice.  For example, when you spot (or suspect) white privilege moments, observed segregation, or stereotypes in the media.

It’s also important for parents (especially white parents) to do their own work here.  How can/should we grow personally in our own awareness of (and work against) racial injustice?  How segregated is your daily life?  Can you change that?  Watch your inner voice and reactions through a racial filter—can you catch yourself (even inadvertently) revisiting old racist stereotypes?  Can you self-talk out of some of those reactions?

The thing I keep coming back to is the reminder that we DO need to talk about race with our kids.  We need to help our kids be aware that racism is both “out there” and “in here.”  We need to expand our relationships and experiences to include increasing diversity.  We need to role model and encourage empathy and critical thinking, and the kind of moral development that is always working towards equality and justice.

We can and should do this work.

If you’re interested in learning more about talking with kids about race, including what sorts of conversation and lessons are appropriate for which ages, consider joining the webinar I’m co-presenting this Friday.